Your shopping cart is empty

"‘The test of great work is whether it stands the test of time.”"

Back in the 1990s, The Douglas Brothers were in the top rank of celebrity portrait photographers. They were described by Howard Rombough in Creative Review as “two of the most desirable photographers of their generation”, and such was their success and notoriety that they had even slipped to the other side of the lens, appearing as the subjects in a campaign for GAP that was shot by Annie Liebowitz.  In 1995 they shut down their East London stills studio and headed off to direct films and commercials.

In the days before digital storage, their entire body of stills work was crated up and placed into a storage lock-up in a warehouse in King’s Cross.  As their directing careers took off, the stills work became forgotten.

When the call came to Tim Fennell, he went to rescue the archive as a favour to two old friends. They had first become close twenty-five years ago when Tim, then a journalist, was sent on an assignment to Cuba with the brothers. They had lost touch for a while after the brothers had moved to the States, but had met again when Tim, now in artist management, had put on an exhibition in LA.

“The warehouse company had been trying to track The Douglas Brothers down for nearly a year. Two days later and their archive would have been thrown in a skip,” notes Tim.

With the developers about to raze the building, what Tim Fennell found were thirty crates of negatives, prints and contact sheets, none of which had seen the light of day for two decades. As Stuart Douglas says: “Ten years of our work came very close to ending up as landfill”

The Douglas Brothers had been courted by art galleries in New York and Tokyo, London and LA, but had never organised themselves to follow through on it. It seems that they never really realised the value of what they had created. Tim Fennell offered to catalogue it , and soon realised how important it was: the brothers had spent the best part of a decade photographing the leading figures from the worlds of art, literature, film, music, sport and fashion.

Tim Fennell contacted Dr Phillip Prodger, Head of Photographs at the National Portrait Gallery, London, and arranged a viewing of the portrait work. Dr Prodger was so struck by the work that he fast-tracked fourteen of the portraits in front of the trustees. These are now part of the primary collection, and will go on display at the gallery in summer 2017.

The test of great work is whether it stands the test of time. Twenty years of being hidden away has not done the work any harm. What is immediately obvious is how strong and familiar the photographs are, perhaps because of how much The Douglas Brothers work has been emulated over the years. The use of old processes is something that is fashionable now, but at the time the brothers were kicking against the tide.

Andrew is the older of the two by ten years. A fine art graduate, he became photographic assistant to both John Swannell and Lord Snowdon, before becoming a commercial photographer in his own right, photographing album covers for The Cure and The Jam.  Younger brother Stuart joined him after finishing college in 1986 and was initially Andrew’s assistant. This quickly became the collaboration that was The Douglas Brothers. What is interesting about this part of the story is how the brothers drew upon each other in order to gain enough confidence to throw the rulebook out of the window. They felt a growing dissatisfaction with what they were doing, believing that they were just hiring out their skills in the service of other people’s photographs. They wanted to follow their own vision, and their vision was people. The brothers decided to make their own rules in order to write their own story.

The prevailing aesthetic in the late 1980s was for highly technical photography, with lots of lighting and pin sharp images. The brothers set up a series of free author portrait sessions with a London publisher, and released a portfolio of the work created. It was a complete denial of the fashionable precision, shot in a style that flew in the face of everything that was going on at that time. In a contemporary interview with Eye Magazine, they are quoted as saying that they saw their work as “a reaction against the pin-sharp, pristine and sterile. A move to mood… We were pushing blur to see how far you could go, to see how little information the brain needs to make a picture.” The portraits acquired by the National Portrait Gallery illustrate the style that they developed. A mixture of lithographs and platinum prints, shot on medium and large format cameras, they pushed the limits of what was acceptable with printing. The brothers welcomed imperfections, dust and scratches as part of the work. They used natural light and long handheld exposures. They famously worked each shoot together: one brother would position himself in front of the subject with a fixed camera, the other would float around using handheld. They claimed that it changed the relationship between the subject and photographer, that it enhanced the intimacy. Stuart said at the time “it’s almost like playing good cop and bad cop”. The name of the brother who had been using the camera that produced the shot in the final edit was never revealed, each one simply credited to “The Douglas Brothers”.

Looking back from now it is perhaps hard to comprehend how different this approach was, and at first the work was slow. The brothers would only agree to take a job if they could edit the work and have final approval. Their physical portfolio was also famously scruffy, held together with gaffer tape, and with prints stacked up inside, more like a scrapbook than the standard professional portfolio. Stuart explained that it acted in a way as a filter; that the art directors who didn't get it wouldn’t have been the ones to give them the jobs they wanted anyway. Their big break came in 1990 when they showed it to Temple Smith at Esquire magazine in New York. The brothers were handed a six-month project, and given free rein. The Creative Review profile of them at the time notes that it was this commission for Esquire that “catapulted the Douglases into the major league of American portraitists”.

They were photographing the biggest celebrities of their age for some of the best publications. From Esquire and The Face to The New Times. They had become the subjects themselves, so great was their brand recognition. When an Adidas commission came, for a series of 10-second adverts for MTV, the shift to the moving image must have seemed like a natural progression. The brothers progressed to shooting commercials with the same two-camera method, and with the same integrity and creative sign-off that they had insisted upon with their stills work.  They closed the London studio and continued as The Douglas Brothers for a while, shooting for clients like Timberland and Carlsberg with great success. Eventually they parted ways, following separate careers in directing. Meanwhile, The Douglas Brothers’ stills work had been left behind, forgotten in a King’s Cross warehouse. Until now.

Seeing this work 25 on is remarkable. The pictures are as fresh as the day they were made and the vision of the brothers is as clear and strong as it ever was.

By Robert Phillips for The Photographer magazine 2016 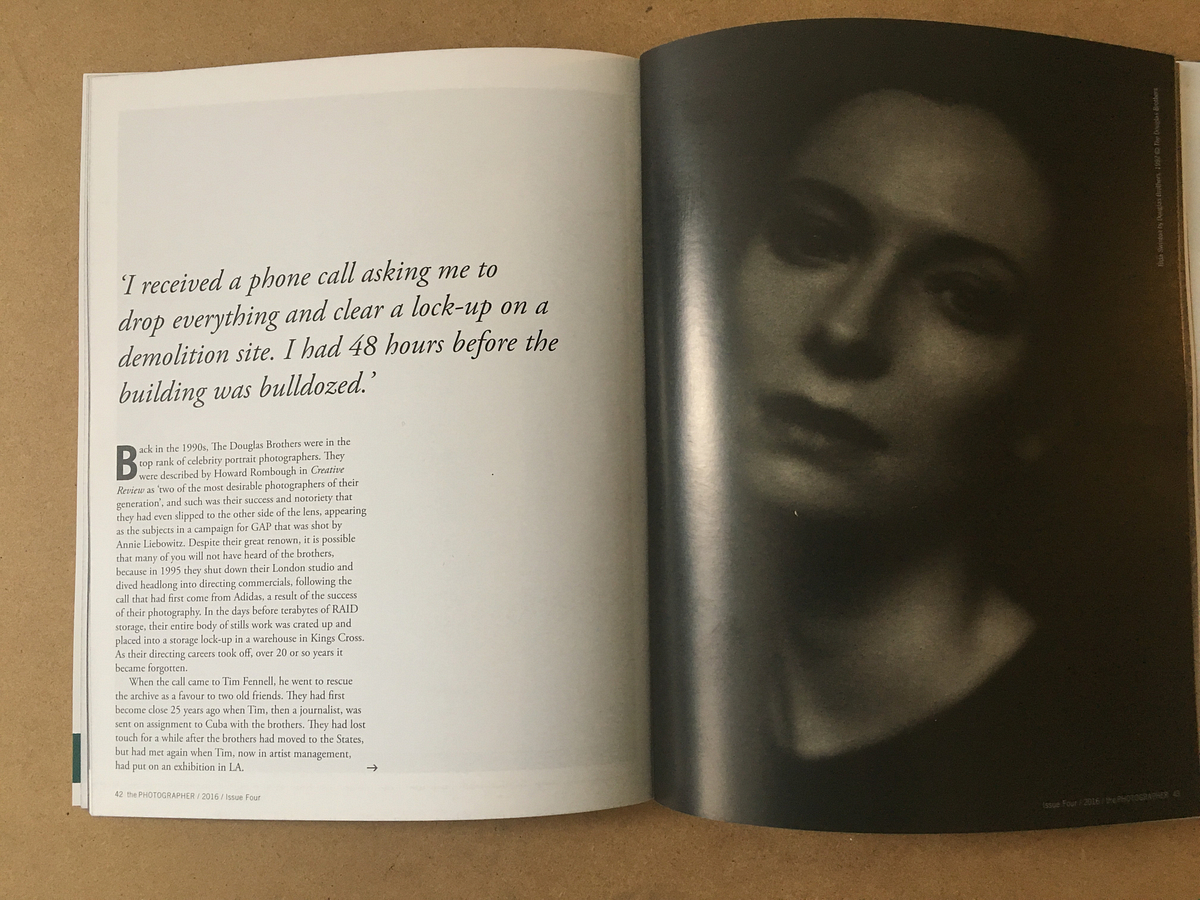 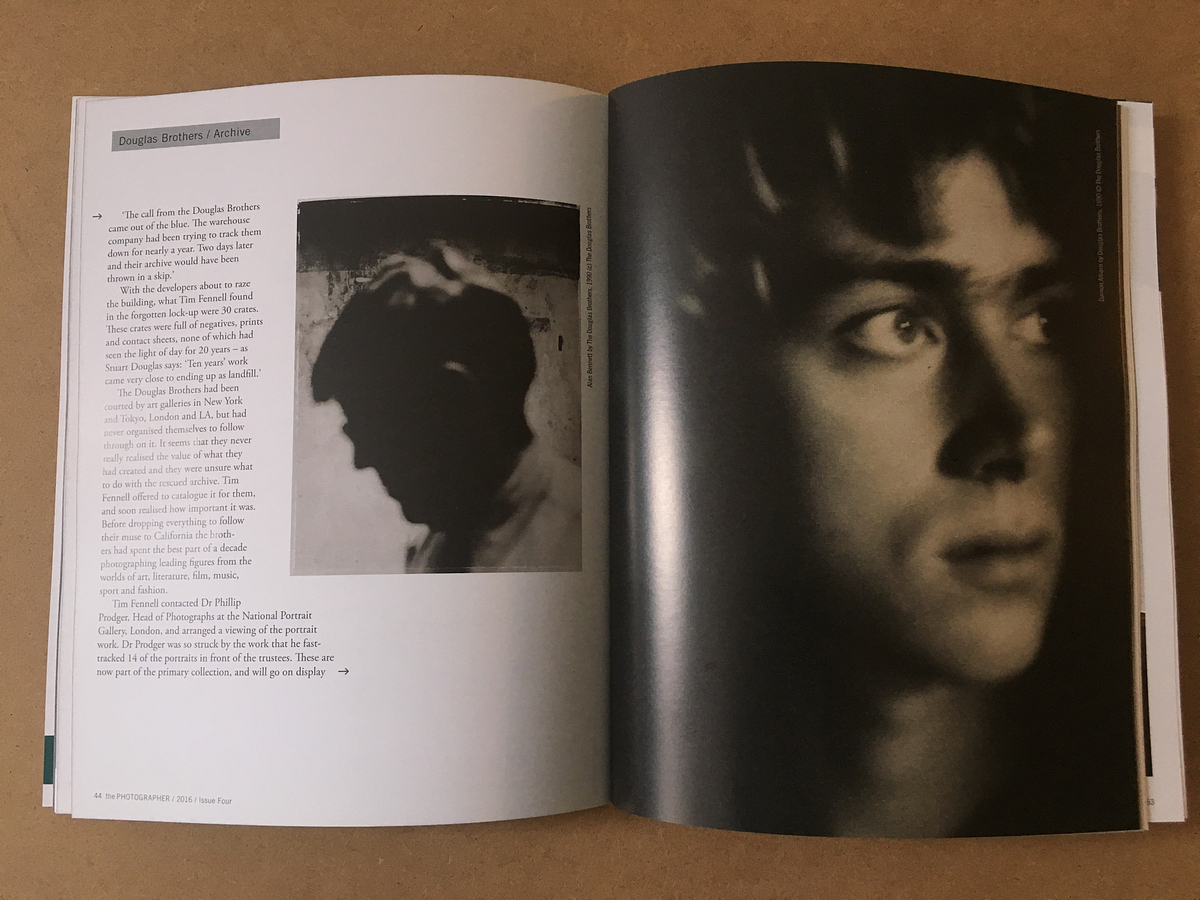 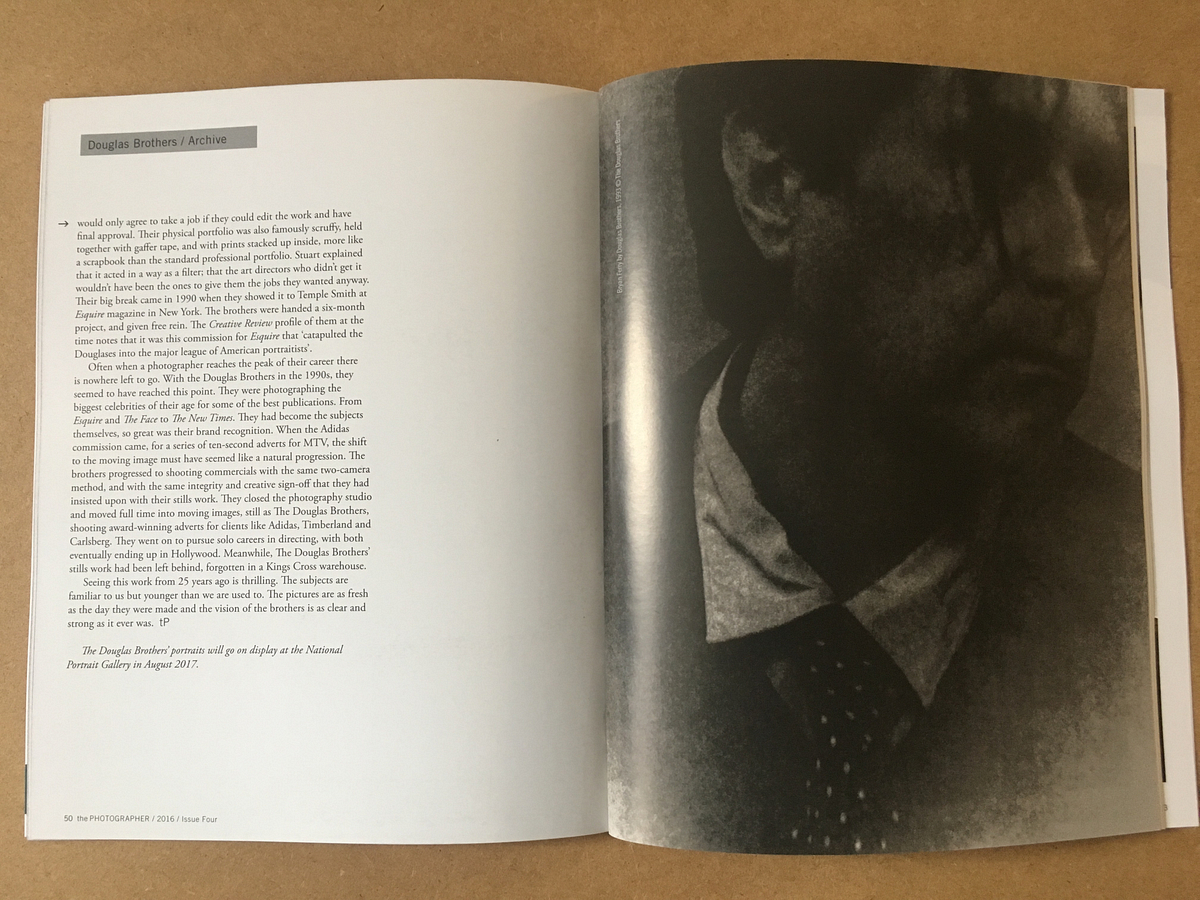 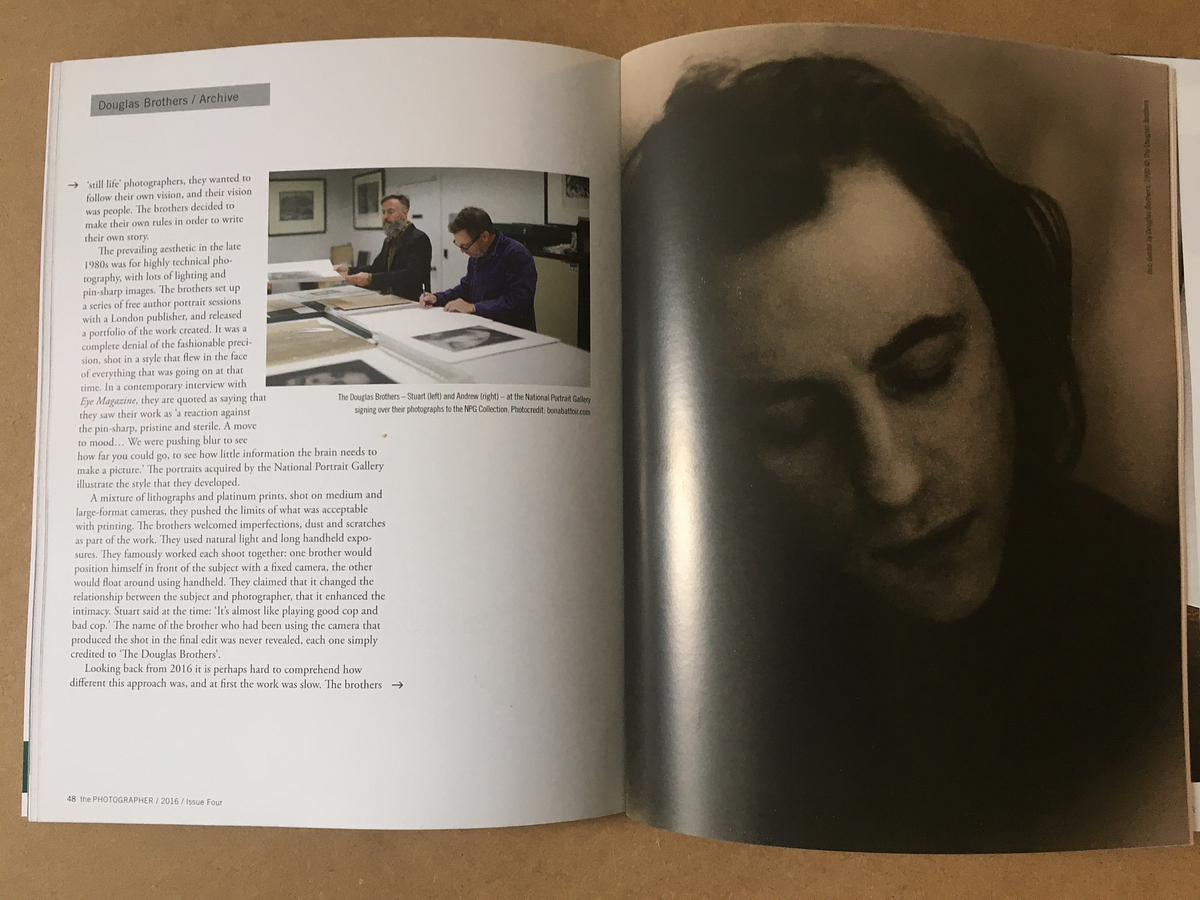 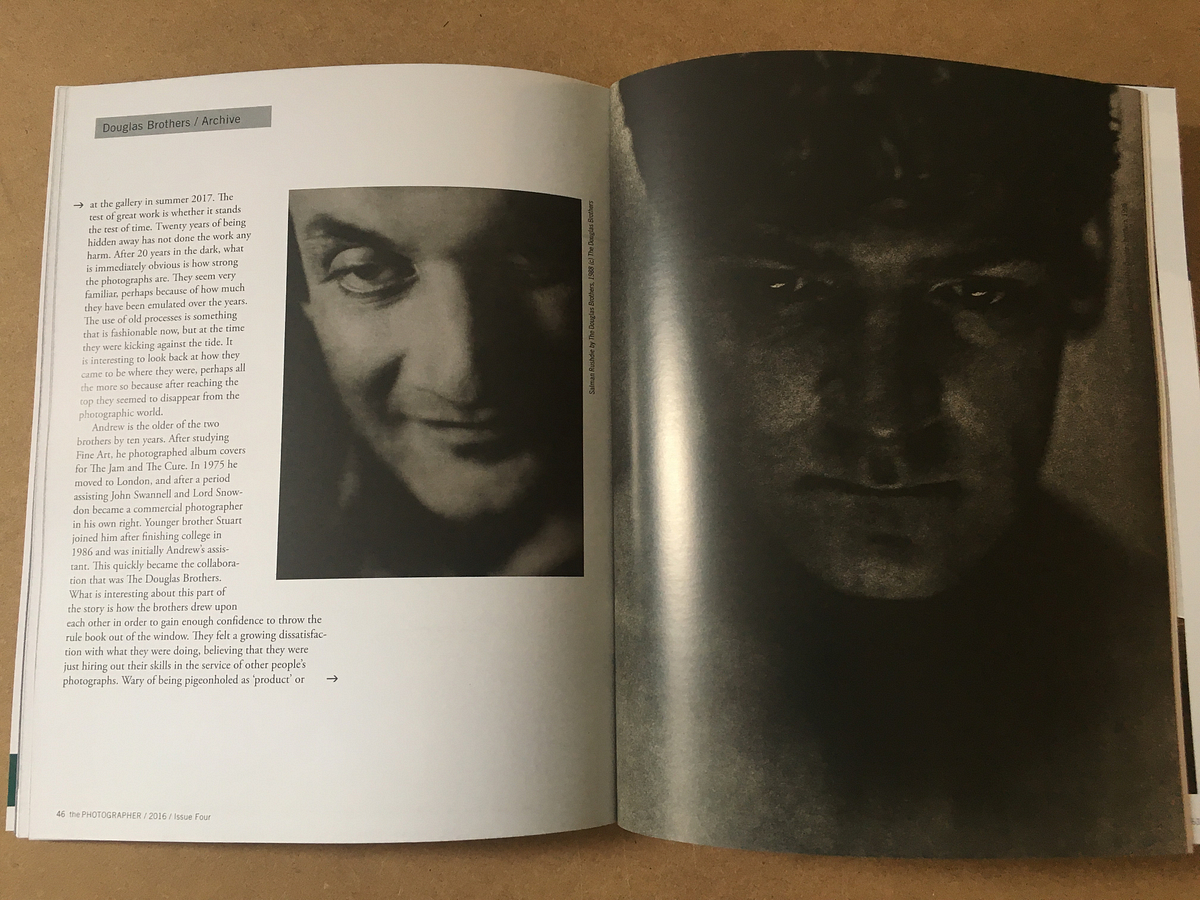